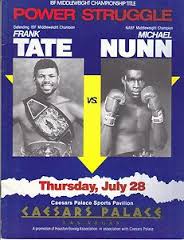 Do you know why boxing weigh-ins were changed to the day before the fight instead of the morning of the fight?   Well, I do.  It happened in 1988 and I was working as  “sports medicine” trainer for the Houston Boxing Association and many professional boxers in Houston, Tx.  At that time Frank Tate, the middleweight champ, was going to defend his belt against Michael Nunn. The problem was that Tate was struggling hard to make weight.  As much as we ran (I used to work out with these guys at that time) and as little as he ate, he couldn’t drop the pounds.  It was going to be a close call.  We knew a sucked down fighter would not only lose but also be in physical danger.  Dehydration puts your brain at even more risk for damage and I told the audience/press that on the podium at Caeser’s Palace.   There was a big controversy surrounding our demand for a change and a lot of yelling occurred that day but we got our way.  Tate was able to weigh in the day before the fight and…….still lost.  Such is life.  Even so, boxing was changed forever.  In a strange but meaningful coincidence, I was partly responsible for helping stave off some damage to dehydrated fighters over the past 25 years.   Here is the proof that this was the first fight to start that change in the time of weigh-ins.  Lastly, click this link from an LA Times article in 1988 where I was mentioned as part of the impetus behind the change.   I was only 23 but even then I was worried about head injuries.

Email your comments or questions to Cryo@all-starsports.com