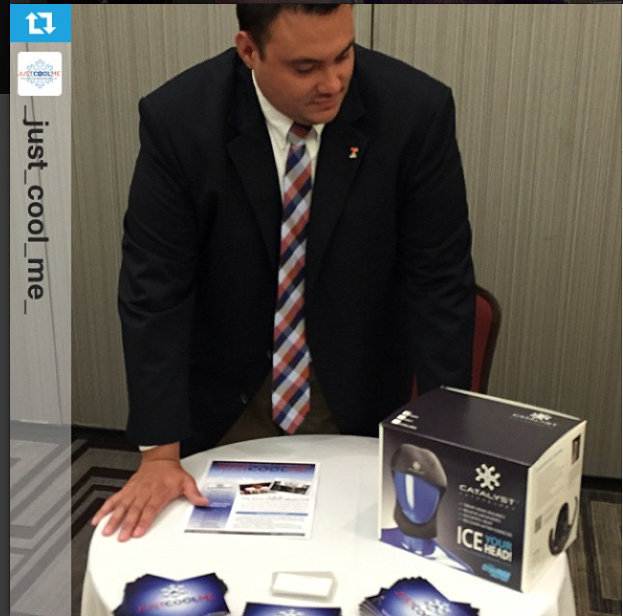 4/18/15 Turley will defend the CryoHelmet to the bitter end. 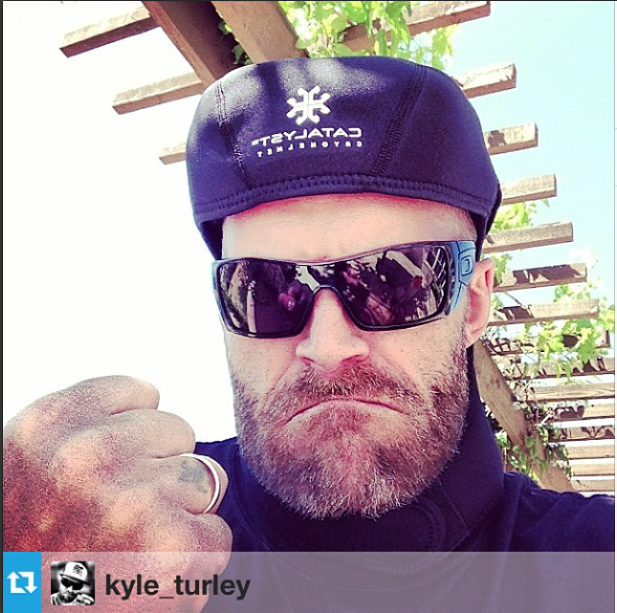 2/10/15 More and more CryoHelmets are going out with spring training gear for MLB.

1/30/14 Tons of active and retired NFL Players check out the CryoHelmet at the Sports 1 Marketing table at the NFLPA Event during the Super Bowl Weekend in Phoenix, Arizona.

8/1/14 Alex Avila of the Detroit Tigers Using the CryoHelmet of his concessions and hard foul tips! http://www.mlive.com/tigers/index.ssf/2014/06/goofy_looking_device_helps_det.html

7/1/14 Now over half  of MLB teams have the CryoHelmet. At least three different catchers have used it for post concussion injuries or heat recovery (Wilin Rosario, Alex Avila and Stephen Vogt)

6/1/14 At least one MLB catcher has used the CryoHelmet after hard foul tip to the mask.  Also, get ready NATA show.  Here we come again!

5/1/14 We continue to get great feedback for migraines.   We now have two ICU doctors using the CryoHelmet for Therapeutic Hypothermia as well!

4/1/14 over 30% of MLB catchers/trainers have CryoHelmets.  Also, thanks to ex-NFLer Kyle Turley for helping to spread the word about our product.  He loves it.

3/1/14 We have been to MLB Spring Training on both coasts and we are batting 1000.  All teams were loving the product for both performance/recovery as well as concussion treatment.  The ATs and the teams docs seem on board.  The tipping point is coming soon!

2/7/13 More order of the CryoHelmet keep going out.  Spring training is upon us and All-Star will be speaking with baseball players and trainers to discuss concussion treatment as well as performance/recovery benefits of the CryoHelmet 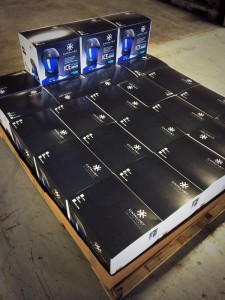 Right now some professional athletes (football) have been receiving and/or asking about the CryoHelmet.  The word is spreading.  Later this month, the CryoHelmet will be used during a professional boxing match in Houston.  The fighters will have their heads iced as they leave the ring.

We are ready to sell and ship.  We were represented well at the MLB Winter Meetings.  Thanks for all the interest by agents and teams.

Everything looks like we are set for mid November.  Welcome NATA members who saw our advertisement in your newsletter.

10/11 First shipment of Cryo Helmets coming.  See box below.  Should be ready for sale this November! 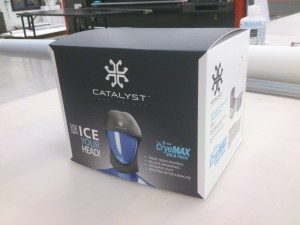 8/20 Third and fourth prototypes being tweaked.   Back to the drawing board after some great feedback and then back to the field again soon.

7/7  Chris Weidman beats Anderson Silva.  Here are some pictures of Silva, one of the greatest MMA fighters of all time, right after he was knocked out.  Look what they are doing to his head.  Ice!  If you are going to do it then do it right.   How about a Cryo Helmet instead? 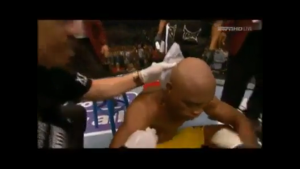 7/4 – Happy Fourth of July!  The Cryo Helmet concept is gaining traction.  Last few adjustments are being made.  Production is ramping up.  A few big names will be checking out our prototypes soon.  More to come.

6/27/13 – Last day of the National Athletic Trainers Association with over 11,000 attendees 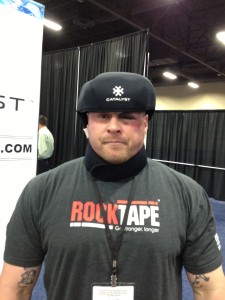 Someone needed the Cryo Helmet at the show!  Ok, we are kidding but he wished he had it at the time. 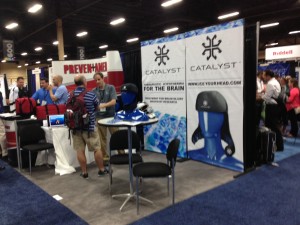 Stan Jurga, Jr teaches someone about the Catalyst Cryo Helmet

6/25/13 – Made a bunch of contacts with athletic trainers (even some from professional teams).   We really feel great about the positive feedback we received!

Dr. Farrago in front of the Catalyst Cryo Helmet Display

6/24/13 – The Cryo Helmet is being launched this week at the NATA 2013 in Las Vegas.  Our goal is to introduce ourselves, get feedback from some of the trainers, engage the attendees on the newest way to treat mild head injuries and show our passion to help millions of athletes around the world.

Email your comments or questions to Cryo@all-starsports.com